With pressure on dairy farmers mounting to cut the carbon footprint of their operations and improve efficiencies amid a backdrop of labour challenges, technology has the potential to help all three areas.

The Dairy Group recently carried out independent field evaluations of new technology on commercial dairy farms, based around improving three key areas of the milking routine:

Ian Ohnstad, milking technology specialist at The Dairy Group, explains: “The purpose of these evaluations was to find out do they [the technologies] work and do they do what they say on the tin.”

Cluster presentation is about the clusters hanging squarely underneath the cow, with even weight distribution on all four quarters.

Unsatisfactory cluster presentation can lead to a number of milking issues including uneven and/or incomplete milking.

The device was installed on a 72-point rotary parlour and assessed over eight weeks, with an initial evaluation undertaken prior to the installation.

Mr Ohnstad says there were no measurable differences to milk yield, speed or flow rates and milking duration also remained unchanged with the cluster support device.

However, there was a 59.6% reduction in liner slips when the device was used. As well as this, the device saw 47% fewer kick-offs.

As well as, and apart from, support devices, there are also several small things farmers can do to improve cluster presentation.

These include ensuring the long milk and pulsation tubes are a suitable length and that clusters are not twisted during attachment, says Mr Ohnstad.

Ensuring effective disinfectant is applied to the teats after milking is integral in helping minimise the risk of mastitis, as well as being beneficial in conditioning the teat skin.

In practice, this involves either dipping or spraying teats, however, research has shown that teat coverage averages just 50% when sprayed, compared with 95% when dipping teats.

The platform-mounted spray system was used to disinfect teats once the milking cluster was removed and teat coverage (as a percentage) was assessed, as well as how much product was needed to enable good coverage.

With a balance needed to be found between good coverage and the amount of disinfectant product used, the trial looked specifically at the relationship between spray duration and chemical consumption.

It found the optimal interval is two sprays lasting 0.5sec each.

The teat spray robot was analysed to further look at the relationship between teat coverage and product consumption.

When the consumption was doubled to 60ml a cow, teat end coverage increased to 96% and teat barrel to 86%.

Researchers then looked at the impact tail trimming could have on performance of the robot, due to the unit relying on a camera to detect the teats and fix the spray location. 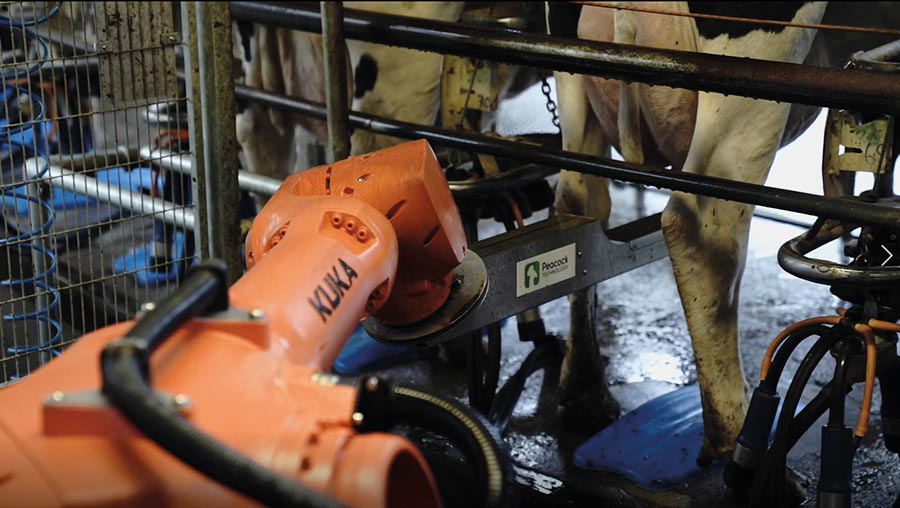 They found that on cows with trimmed tails, a 30ml a cow consumption rate resulted in 95% teat end coverage and 81% barrel coverage – a significant improvement.

At a consumption rate of 60ml a cow, teat end coverage was increased to 100%, while 94% of the teat barrel was covered.

“The very clear guideline in my mind is that if you’re considering this kind of robot, trim the tails,” advises Mr Ohnstad.

A cow that is comfortable will milk out quicker and completely, improving overall milking efficiency.

The biggest driver for increasing milking speed at cow level is to increase vacuum level. However, this can also lead to an increase in teat congestion, discomfort, teat ringing and incomplete milking.

The InVent system was trialled on three commercial farms to assess post-milking teat condition. The teats were scored after milking for teat base ringing, congestion and colour.

The score was based on a scale of one to three, with a score of one meaning no evidence of change in teat tissue and a three meaning significant change. 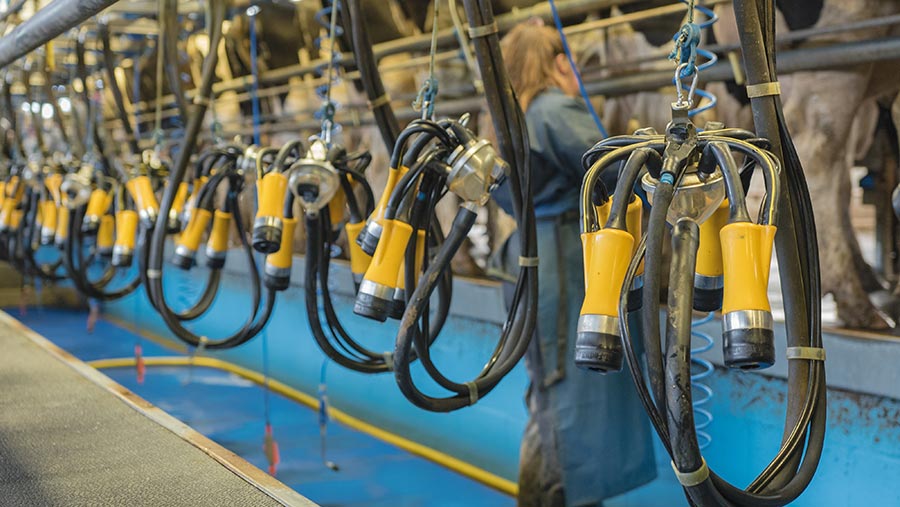 Compared with non-vented systems, total cows receiving a score three for ringing, congestion and colour were all reduced significantly with the InVent system.

The Flow Responsive milking system was installed on a 72-point rotary parlour and monitored for 12 months.

The system works by increasing and decreasing vacuum depending on flow speed throughout the milking, enabling faster milking at peak flow periods, without causing damage to teat condition.

The data revealed an average milk flow increase of 8.1% and a reduction in milking time of 41sec a cow where the Flow Responsive system was used. As well as this, it did not cause teat congestion.

“All of these examined technologies offer the potential to improve milking performance without compromising cow comfort and teat condition.

“If teat congestion can be managed at a higher operating vacuum level, then milking speed will increase,” believes Mr Ohnstad.

While the technology on trial is not an exhaustive reflection of what is available, it does highlight some of the potential innovation and how useful this could be for dairy farmers, says Mr Ohnstad.

He adds: “We need to recognise that the environment we’re operating in is changing and embrace some of these new technologies. But, at the same time, they need to be exposed to rigorous evaluations.”

Rain harvesting - The garden essential Pinterest is predicting for 2023