Farmers Weekly looks at five technologies that could improve farming effectiveness, which were showcased at the AgriTechE Reap conference.

See also: Why agroforestry is adding value on arable farms

“We’re completely data source agnostic. We will take satellite, drone, mobile phone, in-ground sensor – any kind of data that is gathered in the field – and make good use of it.”

Satellite data is used as a base layer, and if a farmer or agronomist has a drone, the firm can supply an autopilot solution with the Omega Crop software to fly the field to collect relevant data.

“We use that data to give you actionable intelligence about your field. We tell you what the information means. We can predict yields, but also focus on predicting diseases before they occur and mapping weeds at any point in the crop growing cycle.”

The disease-prediction model uses weather and other data to forecast disease pressure in the coming days and even weeks, with a level of risk.

“If we can tell you there won’t be another disease event for another 18 days and good weather for at least another 15, you can pick your moment to do another application, which prolongs the period of protection, and potentially lowers costs by extending protection and reducing the number of sprays required,” he says.

So far, there are models for septoria and fusarium ear blight in wheat, while for weeds the focus in the UK has been on blackgrass.

Weeds can be mapped using drones early in the season, as they emerge, as well as later in the season, ready to help in-between crop control. The data can also be used to predict the yield loss from weeds or diseases with and without treatment.

Final yield predictions can be made as early as March, with increasing accuracy as it gets closer to harvest.

“We can make a yield prediction using minimum information from growers, but as they add more information, including inputs, and we’re able to track that change over time and compare with previous seasons’ performance, the margin of error in our prediction narrows.”

With the right data, the yield prediction is usually about 98% accurate a month ahead of harvest, says Mr Bainbridge.

The service is available commercially in the UK, with agronomists the primary target client.

Muddy Machines has developed an automated asparagus harvester capable of distinguishing between spears that are ready to harvest and those that are not.

It uses an automated gripper arm to accurately cut the asparagus and place in a container, while also collecting data on emerging spears to help predict yield.

The team is working with John Chinn of Cobrey Farms to develop the system. Other selectively harvested crops, such as tenderstem broccoli, and labour-intensive services such as weeding are also targets, says Florian Richter, founder and chief executive officer of Muddy Machines. 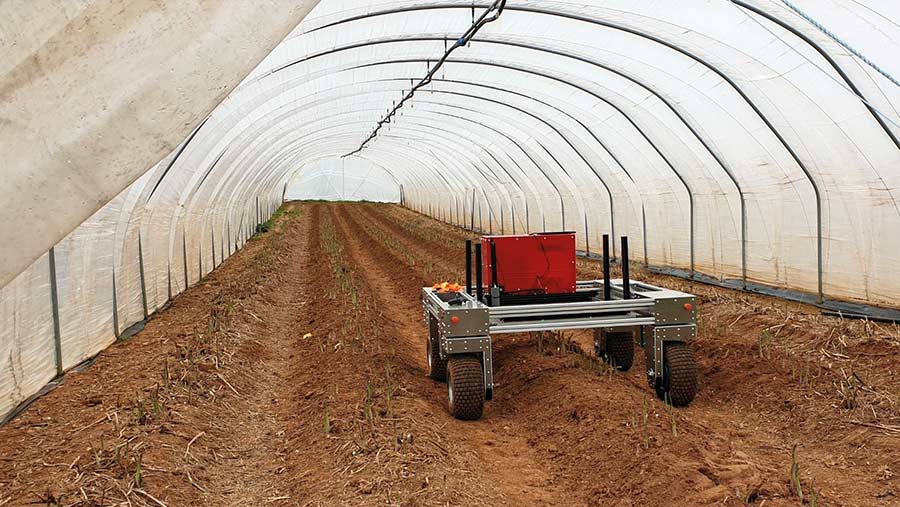 Fieldwork Robotics, a spin out from the University of Plymouth, has developed a variable-stiffness robot arm that emulates some of the aspects of a human arm to pick soft fruits, such as raspberries. By changing the grippers it can be reconfigured for other fruit and veg.

Fundamental biological research is showing that the circadian clock in plants could be used to improve yields and sustainability, the University of Cambridge’s Alex Webb says.

All organisms have evolved a 24-hour internal clock to anticipate and align events to the changes in light and dark, warm and cold. In plants, virtually all activity is controlled by circadian rhythms, including photosynthesis, growth and stomata movement – important for water use efficiency, defence responses and interaction with pollinators.

“This clock is present in every cell of the plant, and we know the molecular nature through studies of model organisms,” he says.

This knowledge could be used to improve either plant performance or crop management. For example, John Innes Centre research led by Anthony Dodd is showing how glyphosate effectiveness can be influenced by the time of application.

“We also found the minimum effective dose varied by time of day, so with some knowledge of the underlying circadian rhythm, it might be possible to fine-tune the herbicide concentration according to the time of day to reduce cost and leaching into the environment,” says Prof Dodd.

Another opportunity lies within breeding, suggests Prof Webb. It’s possible to affect the function of the circadian clock within specific tissues – for example, in the water-carrying vascular tissues that control heading date, or in epidermal skin tissues to regulate growth. By identifying which genes control these clocks, breeders could be given tools to manipulate heading or flowering in wheat, he explains.

Prof Webb’s lab is collaborating with Niab using its Magic wheat population to investigate which genes are associated with earlier or later heading and regulate flowering time that could be a target for breeding.

A team of computer scientists from Manchester Metropolitan University, led by Liangxiu Han, is working with Kent farmer Andy Howard to use big data and machine learning to automatically diagnose how much nitrogen is in plants.

The N2Vision project uses a combination of drone, robot and camera phone imagery taken throughout the season from wheat plots treated with no N, 80kg N/ha, 160kg N/ha and 240kg N/ha to learn about, and ultimately diagnose, nitrogen status.

“The long-term idea is to use that data to have a drone or robot going across a field to recognise nitrogen status at plant level, and then apply nitrogen accurately at that level,” says Mr Howard.

Initial results have been promising, with 96-97% accuracy of N status achieved.

A pelleted fertiliser made by capturing carbon dioxide from a point source into an organic material has been developed in a collaboration between CCm Technology and Cranfield University.

The fertilisers, which have just 15% of the carbon footprint of traditional products, have been trialled on winter wheat and winter barley, says Ruben Sakrabani from Cranfield University. “When they contact moisture, they swell up, which is when we think they release the nutrients to meet timely demand according to the crop’s growth stages.

“We are also interested to see how stable the carbon in the fertiliser is within the soil, and the effect on roots.”

Another collaboration between AgriGrub, Niab and Microbiotech is making a net-zero biofertiliser by feeding food waste to black soldier flies.

The flies convert the food waste into a high-value protein-rich animal feed, leaving a bi-product – knows as frass – which is produced in large amounts by the feeding larvae.

“Frass releases its nutrients gradually during the rose growing season, leading to improved growth, leaf colour and numbers of flowers. It also made the roses less susceptible to attack from pests such as aphids.”

Initially, high-value crops, such as roses, are the target for the product, but if production increases it could be suitable for use as a starter fertiliser in more broad-acre crops, he suggests.

All projects/research were featured at the 2021 AgriTechE Reap conference

20 lawn ideas to get creative with your grassy garden