Farm technology in the spotlight at Danish Agromek show


It’s been four years since the last Agromec, northern Europe’s largest agricultural trade fair. So to mark its reopening we headed to Denmark to see what farm kit was on display.

New farm tech was very much the order of the day and we’ve rounded up some of the highlights from the event.

A Ukrainian appeal saw several manufacturers from the war-torn country display their kit for the first time at Agromek, including cultivator maker Technopol.

Production of the firm’s flagship Aley strip-till cultivators has slowed as a result of the Russian invasion, with continued missile strikes leaving Kropyvnytskyi, the central Ukrainian city in which the factory is based, without electricity for up to five days at a time.

The Aley is available in mounted and trailed formats, can be custom-made in sizes ranging from 4.5m to 9m and has row spacings of 45cm, 52cm or 70cm.

It works to a depth of 35cm, chopping plant residues – most commonly sunflower and maize crops in its home market – and applying either liquid or solid fertilisers in the same pass.

The maker says that the decline of the Ukrainian agricultural sector has prompted its expansion into Europe, as it seeks to keep production going and its workers in employment. 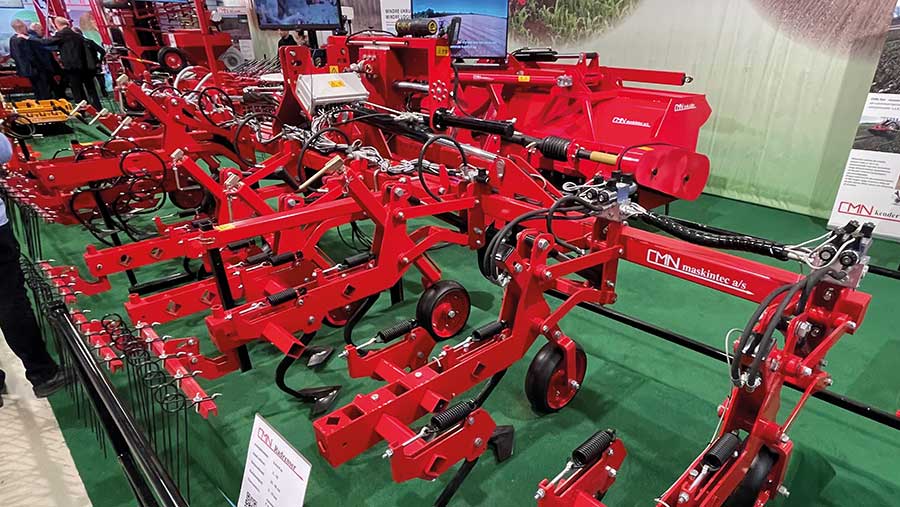 Danish tillage and hoeing machinery maker CMN Maskintec unveiled what it believes to be an industry first – an ultrasonic sensor-guided inter-row hoe.

This has been designed to remedy the issues with traditional hoeing kit that is susceptible to inconsistent depth control, where working depth of the shares varies due to the guide wheel sinking into the soil.

The patented mechanism features individual ultrasonic sensors that are fitted to each of the frame’s sections. These automatically measure the distance from the ground every 2cm when travelling at a forward speed of 7kph.

Based on the reading, the position of each individual section is adjusted hydraulically to follow ground contours while maintaining the target depth that has been programmed on the in-cab terminal.

The system is available on machines with working widths from 3m to 9m. 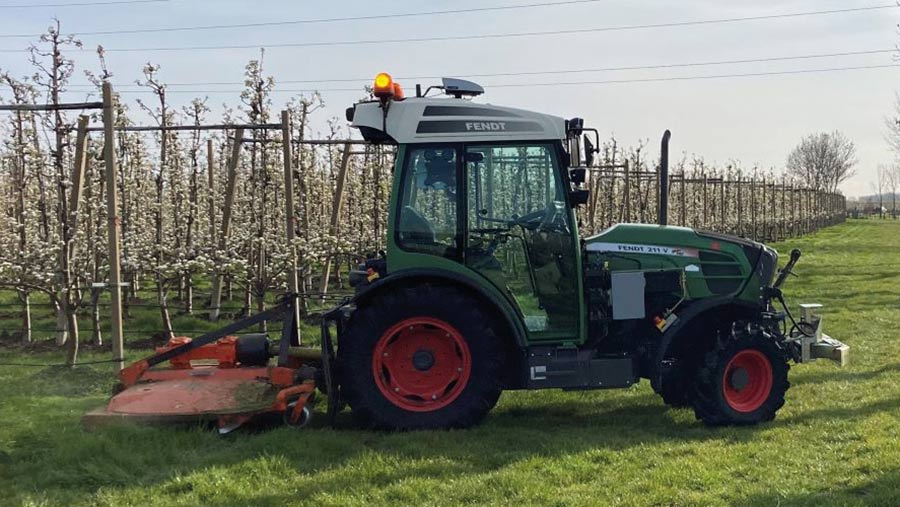 It utilises the tractor’s existing auto-steer function, which it synchronises with the iQuus system to record routes and driving patterns as the tractor operator carries out a particular task.

Once the route and process has been established, iQuus allows the tractor to repeat this task autonomously.

This could save labour on relatively monotonous tasks that would usually require an operator to follow the same A-B lines repeatedly, such as cultivating or drilling, and for fruit farmers that repeat the same path through orchards every year.

Once the implement is attached, the tractor can carry out the tasks following a selected pre-set route, and it will automatically shut off or lift the implement for mapped footpaths and headlands.

There are also four big red emergency stop buttons fitted to the exterior of the tractor so that it can be disabled by farm workers outside of the cab.

If an obstruction is picked up by the sensors, the system will automatically react and send a text message with the tractor’s exact co-ordinates and the cause of the error.

This will be delivered to the mobile device of the operator.

There are currently six tractors running the iQuus software in the Netherlands.

It is currently only available on Fendt, New Holland and Kubota machines, but it is hoped that it will be available across all brands in the near future. 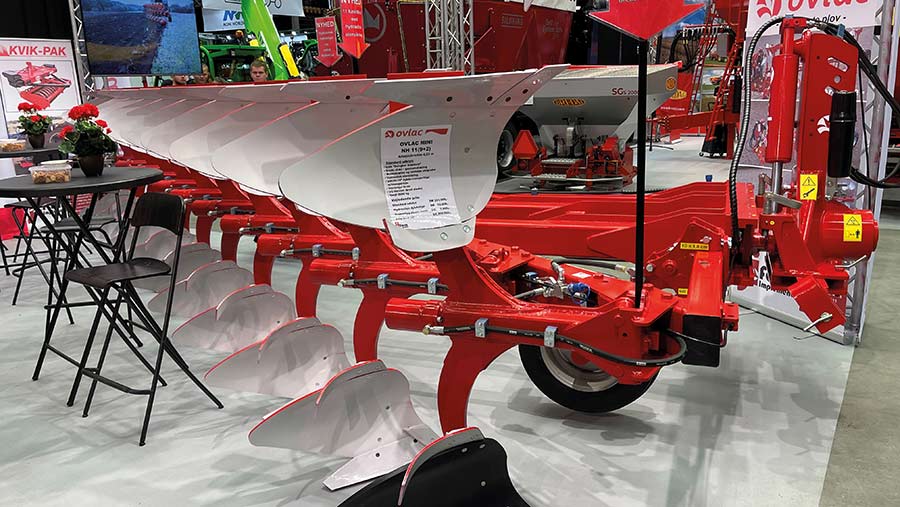 Ovlac revealed the latest version of its Ecoflow shallow plough, which comes with a newly designed share for use in heavy, claggy soils.

The previous generation of the plough was popular with organic farmers that cannot use chemical methods of weed control, and the maker expects similar demand with the new variant.

Available in an 11-furrow format with a 4.23m working width, the plough was awarded one of the Agromek Star awards for its new flat-faced share design.

This creates an even pressure as it cuts through the soil, which is said to reduce the chance of material build-up – something that can be a problem for traditional shares with reversible tips.

It is also possible to bolt on reversible tips. These reduce wear on the front part of the share, making the implement more versatile for farmers with varying soil types. 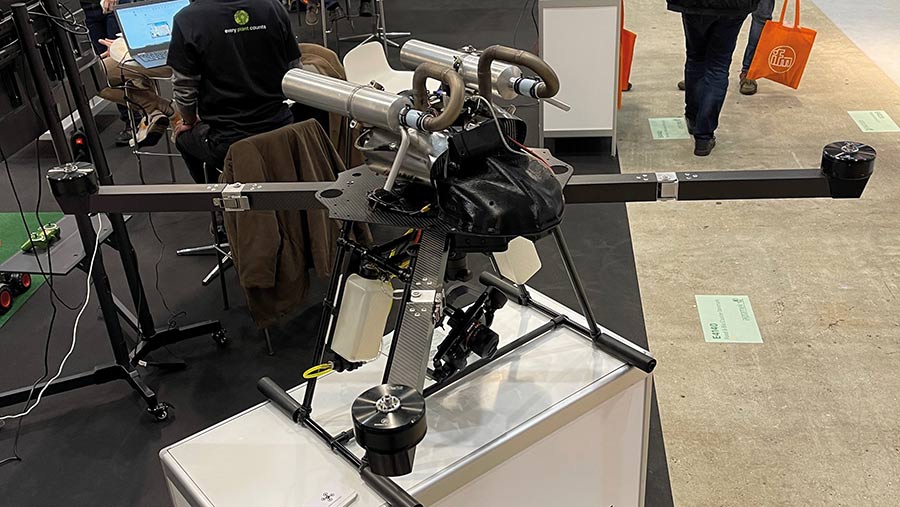 Hosting a series of cameras used for data collection and weed-mapping, the petrol-powered drone has a carrying capacity of 25kg, and can fly continuously for up to 10 hours across an unlimited range, thanks to its 4G connectivity.

When fuel is low, it automatically flies to a refuelling station before resuming its task.

The system doesn’t require any ability or prior knowledge of drone flying, as it operates autonomously once a task is planned on a mobile device or computer.

Should operators prefer, they still have the option to control it from their phone, where they can also access a live HD video stream.

A spraying module for the drone is also being designed in partnership with Danish sprayer manufacturer Danfoil, which won an Agromek Star for its SilverGlider boom structure.

Although in the early stage of development, the spraying function will allow for a more precise product application, essentially spot-treating individual weeds rather than a blanket treatment across entire fields.

The maker says this could reduce chemical usage from 100-200 litres/ha to nearer 30.

The drone can currently only carry 20 litres at a time, but its automatic refilling function means a quick trip to the yard should not delay it for long. 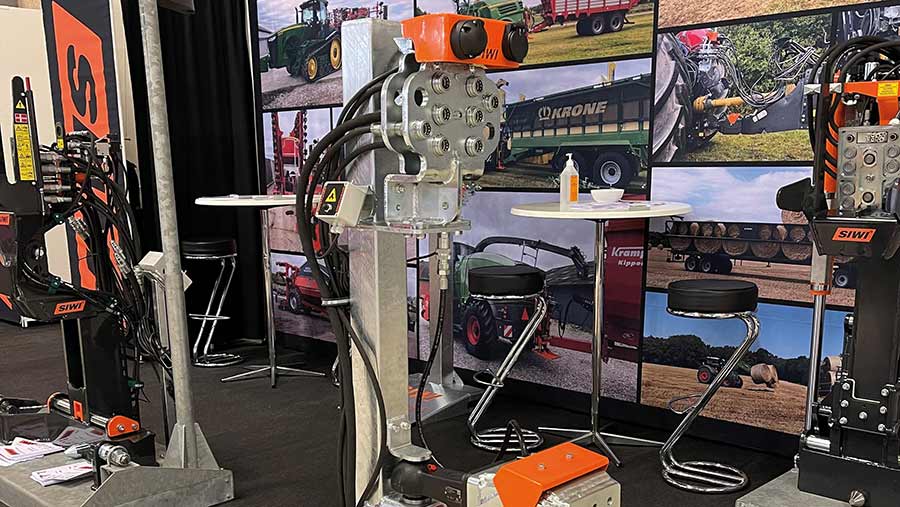 Hailing from the town of Silkeborg, Danish firm Siwi cut its teeth making automatic systems for coupling tractor-towed implements without leaving the cab.

Its latest offering, which was shown for the first time at Agromek, is an automatic emergency disconnection system designed for use with balers.

Dubbed Firesafe, it is solely for use in the event of a fire, and was designed after the long, dry summer saw a spike in fire-related insurance claims, with tractor operators losing their machines to blazes or suffering injuries attempting to uncouple the balers.

In the event of a fire, a single switch in the cab will disconnect the hydraulic hoses, electric power output, and the connector on the implement’s draw bar, so that the operator can drive away and protect the tractor.

Siwi CEO and founder Rasmus Helms said: “The problem is that it is difficult to get a new tractor at the moment.

“If you order one now, it could be over 12 months before it turns up, and the prices are only going up, making it hard to get a replacement if a farmer loses their tractor in a fire.” 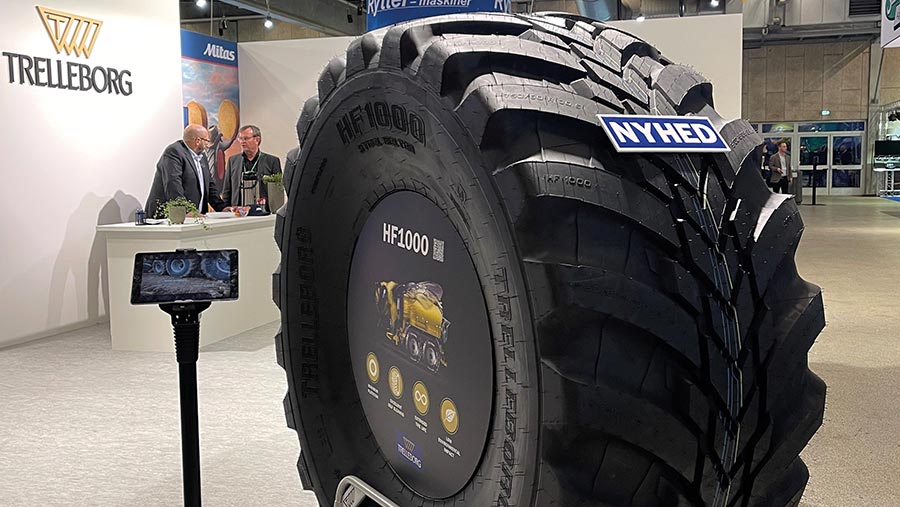 Trelleborg debuted its new HF 1000 tyres, which are designed for forage wagons and slurry tankers.

Their unique tread pattern apparently means that even under maximum stress on a fully loaded vehicle, the footprint of the tyres is around 12.5% larger when compared with competitor brands, giving a more even weight distribution that reduces damage to the soil structure.

The wider tread also promotes a self-cleaning function said to ensure the new range remains 40% cleaner than others on the market. 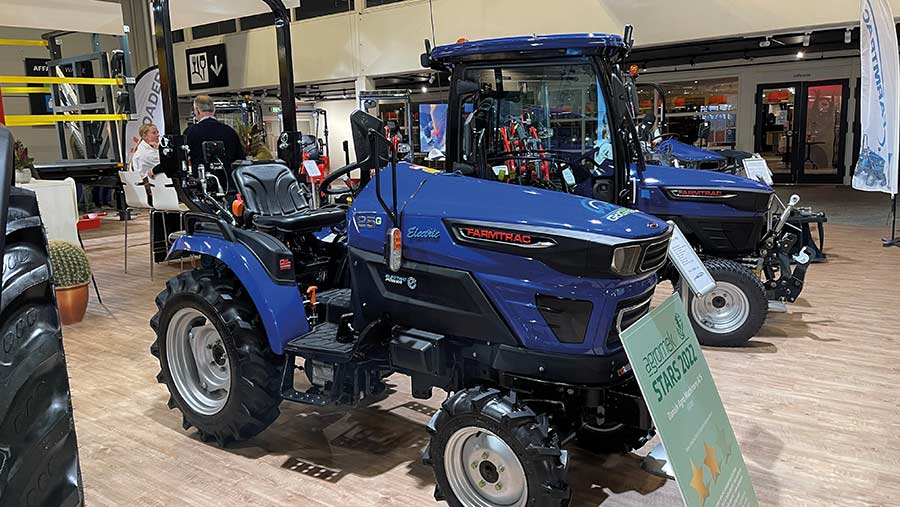 Farmtrac, a subsidiary of the Indian-owned Escorts Group, in which Kubota is a majority shareholder, claims to have beaten the competition in putting an electric tractor into serial production.

Despite its compact proportions, the FT 25G has a run time of between four and six hours depending on the job at hand, and it is said to be comparable in performance to a 25hp diesel tractor.

It is powered by a 300kW lithium battery, and its internal 240V charging system takes around six hours to replenish – something that is best achieved overnight.

The maker says its small dimensions make it perfect for feeding livestock in barns with narrow passages, and it can tow just shy of one tonne. 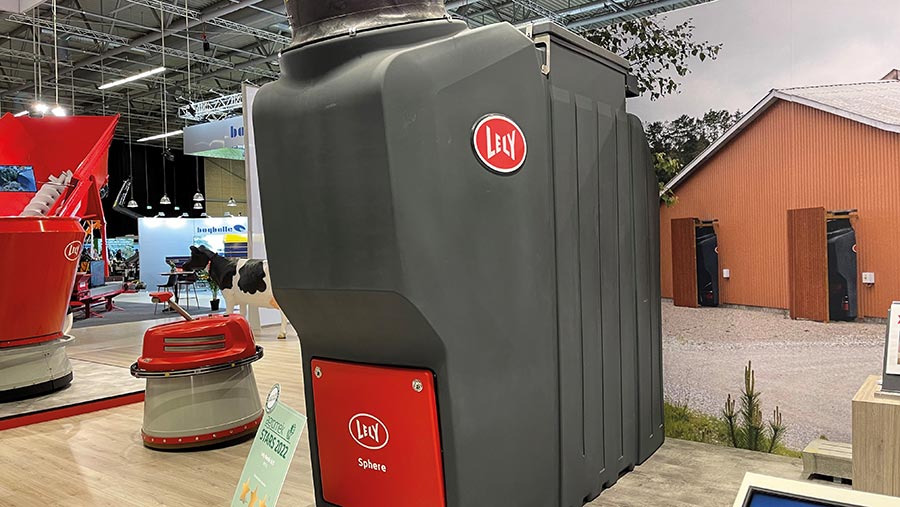 Dairy specialist Lely unveiled a project that it hopes will reduce ammonia in cow sheds.

Called the Sphere, the system is being trialled across several Danish and German farms and works by separating urine and manure from cow sheds, turning the ammonia content from urea into a valuable fertiliser source.

It can be retrofitted to existing barns providing they have a slatted floor, as this is essential when it comes to separating the urine from the dry matter.

A series of steel casings fit over the slats, allowing the urine to trickle through and be collected below, leaving the manure on top for the manufacturer’s Discovery collector to gather up.

The Sphere’s N-Capture unit, which essentially acts as a large ventilator, creates an airflow and negative pressure to draw ammonia up from where it is stored, before washing it with either sulphuric or nitric acid in order to capture the nitrogen from the air.

The system can harvest between 10-20kg of nitrogen from each cow, each year, which can then be used as a fertiliser to apply to the fields. The process also means that overall ammonia emissions are reduced by around 70%.

What Jobs to do in the Garden in January