Unheralded German firm Kalverkamp bagged the only gold medal to be dished out by the DLG, organiser of the bi-annual Agritechnica show in Germany, in its pre-event innovation awards.

Its gargantuan, gantry-style tool carrier, dubbed Nexat, can be adapted to complete all manner of arable tasks, including tilling, drilling, spraying and harvesting.

But rather than towing an implement behind, it carries the attachments in similar fashion to the more modestly-sized Dot platform first developed by SeedMaster in Canada and now owned by US firm Raven Industries.

The widest version extends to 14m when fully unfurled, meaning the tramline wheelings are 12m apart. As a result, Kalverkamp says it is the ultimate machine for controlled-traffic zealots, as it can avoid running on 95% of the field.

The Nexat working with a 70m Dammann sprayer attachment © Kalverkamp

This, in turn, will help minimise compaction and encourage long-term yield improvements through better soil structure.

It’s fully geared up for autonomous operation, but also comes fitted with a cab that rotates through 270deg to allow an operator to control the outfit manually during transport.

Quick-change, modular implements, which will include Vaderstad drills and Dammann sprayers, are mounted between the four electrically driven rubber track units, which themselves pivot through 90deg for travelling on the road. 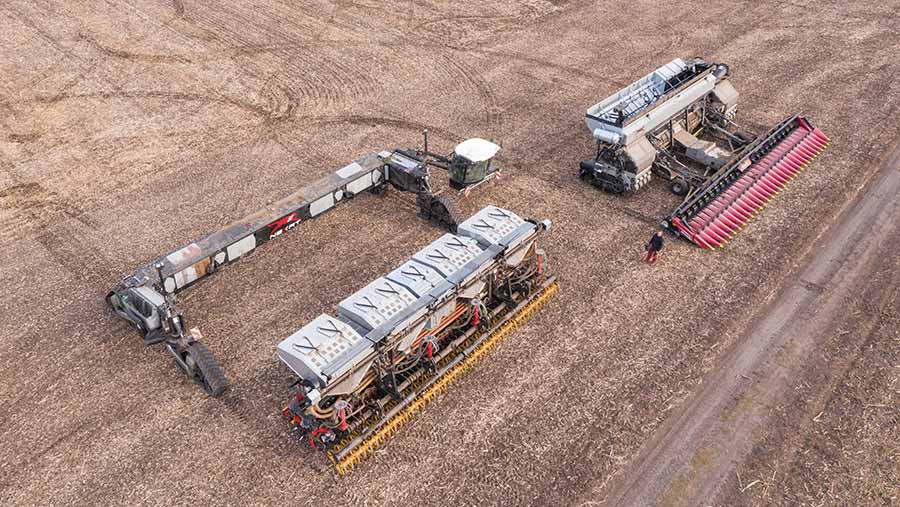 The current iteration is powered by two independent diesel engines, each of which offers an output of 545hp and is coupled to a generator. However, it has also been designed with a view to switching to a renewable power source, such as hydrogen-electric fuel cells.

The most notable quirk of the Nexat tool carrier is that it can be transformed into a combine harvester, with the company estimating grain throughput to be between 130t and 200t/hour with a 14m header attached.

Material is fed through a 5.8m-long rotor mounted transversely to the direction of travel. Grain is carried in a 36cu m tank – twice that of Claas’ flagship Lexion 8900 – and can be unloaded at a rate of 600 litres/sec, meaning it takes just one minute to empty.