Krone and Lemken have unexpectedly launched an autonomous tractor as part of their mightily-named “Combined Powers” project.

The cabless, four-wheel-steer implement carrier, which the companies describe as a “process unit”, has completed trials using 3m Lemken cultivators and drills, and a 4m mower and 9m rake from Krone.

It has no gearbox, with the four-cylinder, 230hp MTU engine instead powering electric motors that drive the wheels (top speed 20kph) and pto shaft. Implements are carried on a conventional three-point linkage.

However, it opens up the option of running electrically powered attachments in the future, which are potentially simpler and more efficient than those with a mechanical pto or hydraulic system.

With no cab, the machine relies on a network of sensors to monitor the surroundings. It currently uses radio remote control, but the makers intend for it to be operated and monitored from a mobile device.

This will allow task information to be sent and received, and for owners to tweak bout plans and geofences.

The vehicle has been built around the Tractor Implement Management (TIM) concept, which means the implement effectively determines its working speed, engine revs and linkage position to best suit the conditions.

As a result, the whole lot operates as a single self-propelled system.

No sooner had the Combined Powers broken cover, then John Deere hit back with its own concept that, visually, at least, has plenty in common.

Dubbed Sesam2 (an acronym of Sustainable Energy Supply for Agricultural Machinery), it has the unusual quirk of a detachable front cab.

This looks to have been borrowed from one of the firm’s self-propelled harvesters, and mounts via a standard A-frame to the front linkage.

In practice, it means the machine can be driven conventionally to the field and the cab dropped off on the headland to provide an on-site office from which the operator can monitor one or more tractors.

Details are pretty sketchy, but it’s said to have more battery capacity than anything Deere has developed before, with 500kWh served up for the all-electric drivetrain and a further 1,000kWh available to power implements.

This is apparently enough to keep the Sesam2 working for up to 10 hours at 80% load.

The chassis is based on that of a 6R, with the batteries spread across the full length of the tractor to balance the load.

Total weight is thought to be almost 18t and the design features steering front wheels, which are smaller than those on the rear.

Other spec details include regular three-point linkages and pto outputs at either end. Recharging is via a connection at the back.

The Sesam2 is the latest in a string of autonomous tractor developments from Deere.

The original Sesam concept debuted at the Sima show in Paris in 2017, with the standard diesel engine replaced by a 130kWh battery pack that powered an adapted DirectDrive transmission.

However, this was estimated to be good for just a couple of hours’ work.

Two years later came the GridCON, which was based on the 6210R tractor platform.

But rather than banks of batteries under the bonnet, it was permanently fed by a 1,000m cable reeled in and out on a drum and robot arm controlled by the guidance system.

This offered an impressive power-to-weight ratio, with the tractor no bigger than a 6195R yet able to produce double the power – 400hp.

Earlier this year, the company announced that its fully autonomous 8R is to go into production within the next 12 months.

It appears as a standard tractor with a cab, but has six pairs of stereo cameras that detect and calculate distances to obstacles from a 360deg view.

Owners will be able to view live images, video and data, as well as the in-field position of the tractor, via a mobile device.

Several prototype tool carriers have slipped out of Horsch’s research and development department over the past year.

The most recent, provisionally named RO24G, has been undergoing testing in Germany and is now headed for more trials in Brazil.

Little is known about the design, except that it sees one of the firm’s 24m drills reconfigured to run on a gantry-style tractor unit. 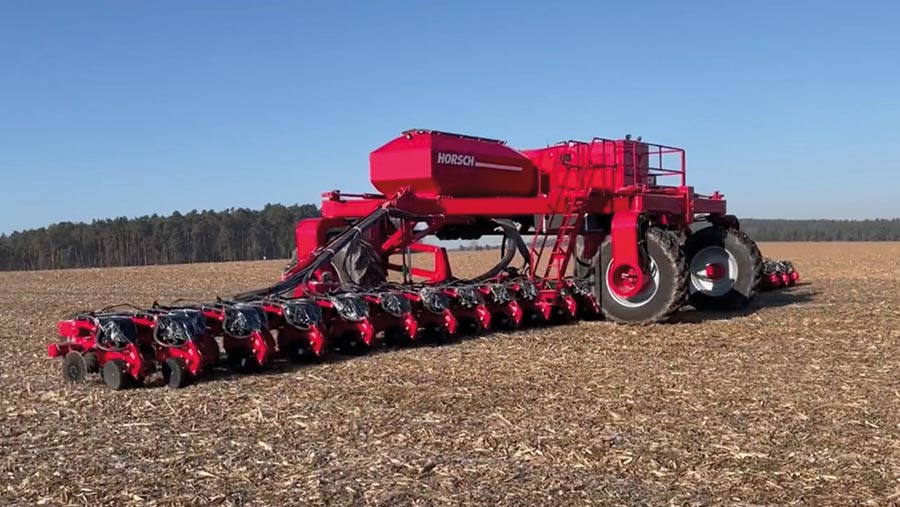 That’s quite different to an earlier prototype – the Robo – which is thought to run a diesel engine of roughly 400hp, paired with a hydrostatic drive and Claas Axion Terratracs.

The arrangement leaves space to attach different tools for drilling, spraying or even grain carting.

Control is via an iPad or purpose built remote and it uses a Trimble guidance system.

Watch the video from Horsch.

Ways To Enjoy Your Garden In Winter