Here, we pick out the best bits.

JCB has a new “compact powerhouse” in its Loadall line-up, with the new 530-60 Agri Super offering a 6m reach and 3t lift capacity.

Packing 130hp under the bonnet and delivering 550Nm torque from its JCB engine, the new model promises plenty of power in a small package, according to the firm’s agricultural Loadall product manager, Ben Mansfield.

The drivetrain features a fully hydrostatic transmission from Bosch, and it can be shod with 24in or more demure 20in wheels – the latter being ideal for the small buildings often found on pig and poultry units.

Each model is fitted out in “Agri Super” spec, with features such as boom suspension and pressure dump valves as standard.

“We have also worked on access, adopting a smaller steering wheel and well-positioned grab handles to make it easier to jump in and out of the cab,” says Mr Mansfield.

“The engine compartment has been kept low-profile to increase visibility, while mirrors are mounted to fit within the machine’s working width to make manoeuvring in small spaces easier.”

The 530-60 is also fitted with JCB’s VariSpeed system, which allows operators to control travel speed independently of hydraulic flow at the turn of a dial.

Production will start in March/April 2023. 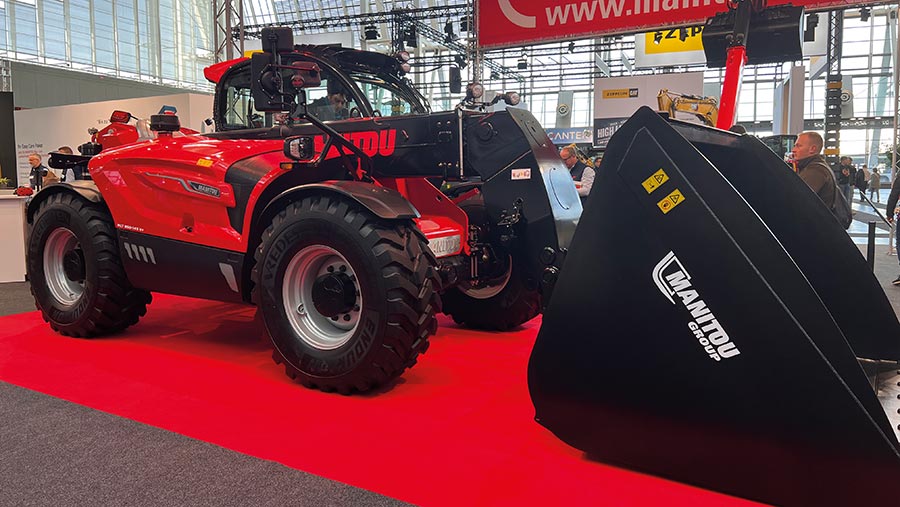 The MLT 850-145 V+ telehandler is the fourth model in the NewAg XL range and completes the company’s line-up of machines aimed at large farms, biogas units, co-operatives and recycling centres.

Its 5t lift and fast hydraulics mean it should be able to handle most high-capacity attachments.

According to Manitou, the MLT 850 also offers the best work rate in its class, with 18% more throughput apparently translating to two extra loaded lorries an hour.

Some of this increase is down to the development of a range of hefty attachments, such as a new 4,500-litre grain bucket and 2,600-litre grab version.

Other highlights include 20% more traction force and 32% more bucket breakout force than its competitors, according to innovation marketing manager Arnaud Sochas.

Similarly, fuel consumption on the MLT 850 is reckoned to be 20% better than its rivals, at 16.5 litres/hour, while cab noise is kept to just 69dbA – the same as Fendt’s Gen 7 Vario tractor.

Order books are now open, with deliveries expected to start from May 2023.

The mini joystick, positioned on the left side of the operator, is controlled only with a finger, saving wrist, elbow and shoulder strain when loading trailers relentlessly for long periods. 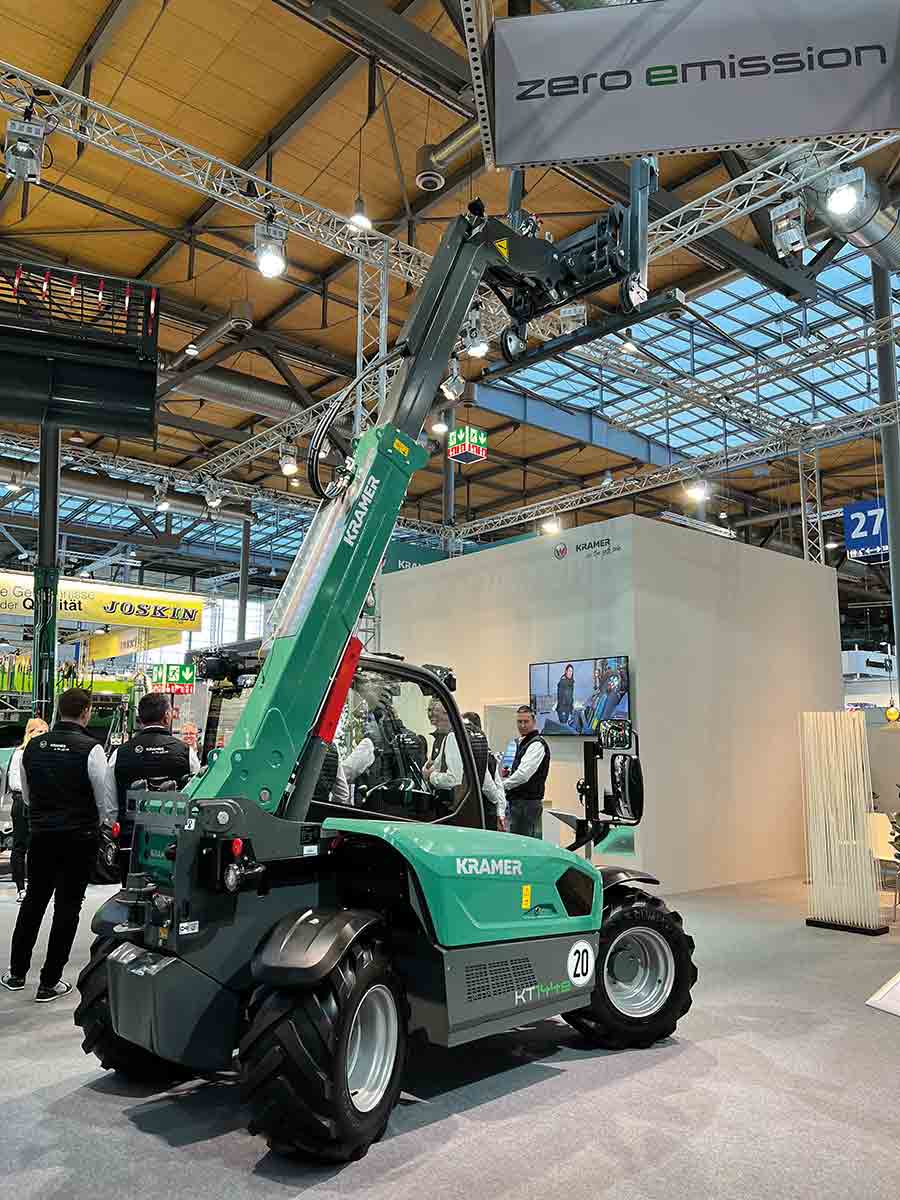 Since partnering with John Deere and selling its agricultural-spec machines through the firm’s dealers, Kramer loader sales have grown exponentially across Europe, and its UK market share is soon expected to hit 20%.

It was showing two electrically powered models at Eurotier, including the KL25.5e – the largest “e-wheel” loader in the company’s portfolio.

Fitted with a 96V lithium-ion battery that provides a run time of up to four hours, this model can handle a payload of 1,750kg and is apparently just as capable as its diesel-powered counterpart.

Its overall performance is said to exceed that of the diesel equivalent and, thanks to the electric motor, power is immediately available for both propulsion and lifting.

The maximum speed of the loader is 25kph, and it can be had with either an 18kWh or 28kWh battery.

The company also showcased its Smart Attach system – a quick-hitch for attachments that require an oil supply, such as sweepers or silage buckets, which allows operators to couple them without leaving the cab.

It uses the quick-coupling locking pins to automatically hitch the attachments, avoiding any faffing with hydraulic hoses.

Existing attachments can be equipped with a quick-change plate adapter, and Kramer also offers a complete retrofit kit. 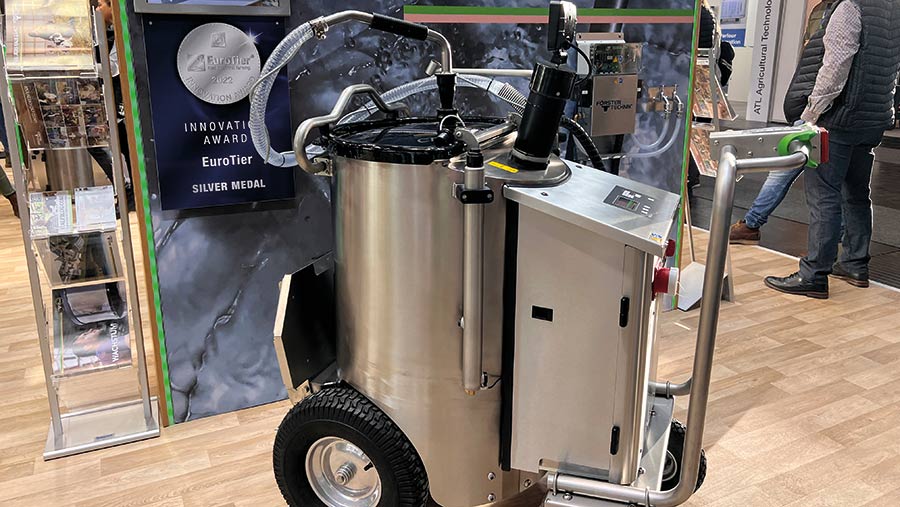 Promising to save dairy farmers up to 240 working hours a year, dairy specialist Forster Technik says its Clean and Fill Station takes the time-consuming tedium out of cleaning milk trolley components after feeding.

With this new system, each trolley is first connected to the Clean and Fill Station – a process that takes less than a minute.

Each subsequent stage of the process then happens automatically, with the application of two cleaning agents and hot and cold water controlled with an accurate flow sensor.

This means the operator can leave the machine running, simply returning ready for the next feeding job.

Filling and heating the milk trolleys at each feeding session also takes time but, with Forster Technik’s system, the tanks of any connected trolleys receive the required amount of water.

A timer means it is ready to go at the correct temperature ahead of the next feed. 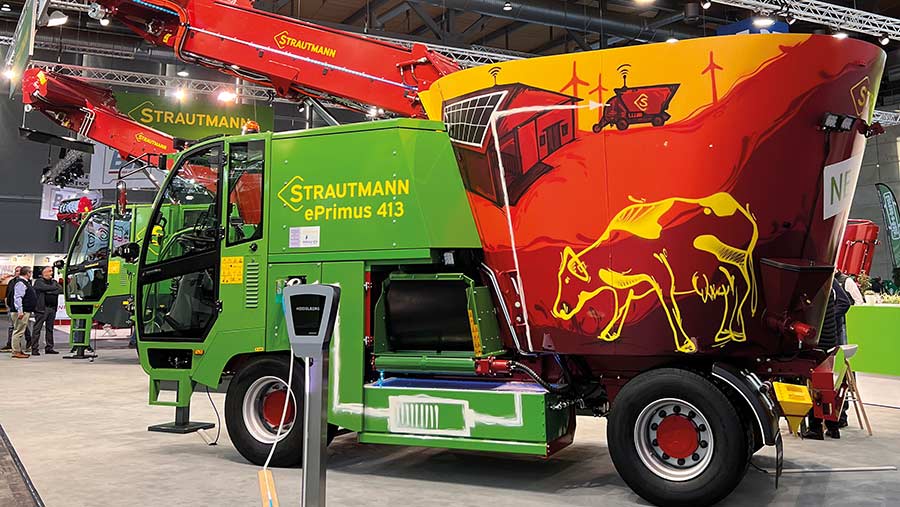 Emission-free feeding is now an option from Strautmann with its ePrimus mixer wagon range, which offers capacities of 11t, 13t and 15t.

This is enough to mix up to 16t of ration, with performance optimised to match the work demand through an intelligent battery management system.

There are two charging options for the ePrimus; an on-board charger is standard but there’s also the option of upgrading to a CCS2 fast-charging kit.

Primarily for those feeding multiple times a day, this allows for an 80% top-up in just 90 minutes.

The batteries should last for about 3,500 feeding sessions before their residual capacity drops below 80%.

There are four electric motors on the machine, for propulsion, to drive the auger, run the hydraulics and turn the milling head – all of which are powered by the high-voltage battery.

According to Strautmann, benefits of electric drive include the elimination of power losses through a mechanical transmission and the provision of full torque immediately.

For those wishing to stick with a conventional diesel-powered machine, the company also launched its Primus 900, which has gained more power, efficiency and strength.

The 280hp six-cylinder engine is a match for the 30cu m mixing volume and the wagon has three driving modes: loading, travelling and feeding.

Operation of all three modes is via a multifunction joystick with storable settings for engine rpm and auger speed, and it provides one-handed operation of the entire machine.

Crab-steer allows operators to get close to the edge of the clamp and there’s also the option of a rear-steering axle.

Capacity ranges from 22t to 28t for the three models in the range, and the milling head has a 2.2m width and will reach 6m high. 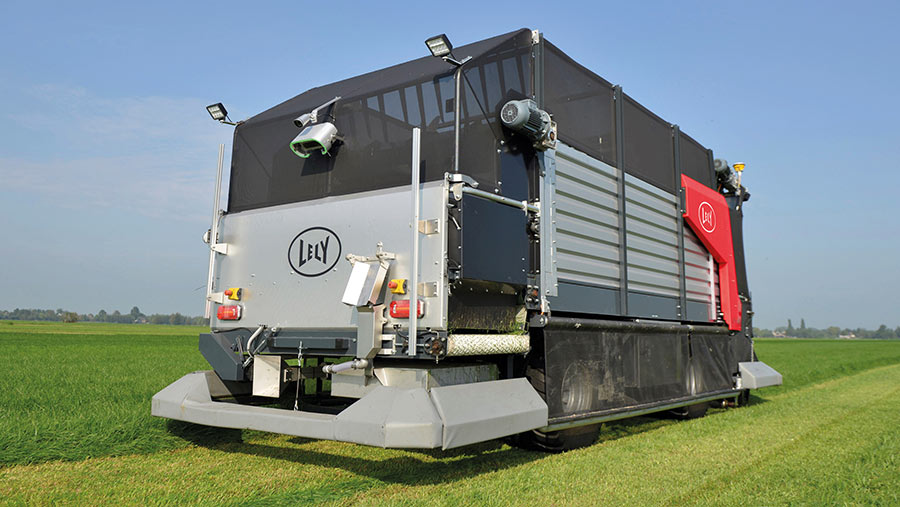 Winner of a DLG Concept Award was Lely with its Exos, a fully autonomous machine designed to both harvest and feed fresh grass to a housed herd.

This potentially means that dairy farmers will be able to use available grass at its nutritional best, avoiding the losses associated with harvesting, conserving and feeding silage.

The Exos would be able to harvest frequently, day or night, which the company also believes improves the taste, and thus intake, of fresh grass compared to zero-grazing systems.

Experience at test farms shows that farmers are able to meet a significant part of roughage requirements with fresh grass from early spring to late autumn. 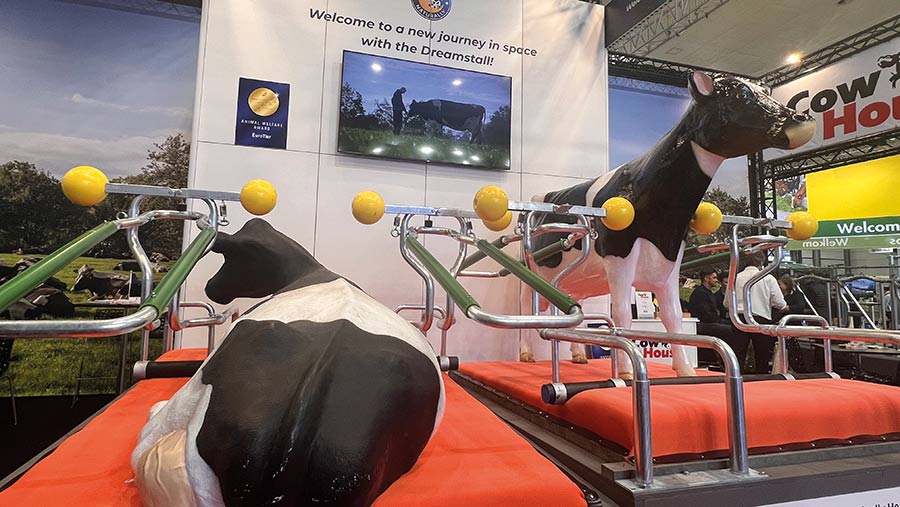 Another DLG medal winner was the Dreamstall, an innovative cubicle design from Cowhouse.

With cows normally spending more than 12 hours a day lying down ruminating, cubicles must provide easy and undisturbed comfort.

However, they need to also serve their purpose, which is primarily to prevent smaller animals turning around and soiling the cubicles.

The Dreamstall achieves this thanks to a pair of flexible spherical shapes that allow the cows to stand freely in the stall.

The conventional dividing bars are replaced by two bendable frames that form a central standing position.

When lying down, the cow is able to use the entire area undisturbed and, when going to stand, the flexible guide helps them rise unfettered. 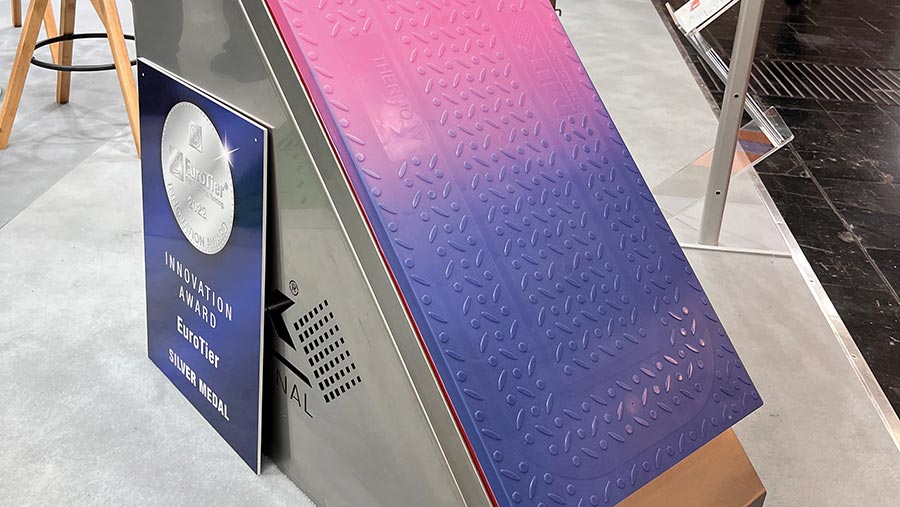 Among many pig-related innovations on show was the Thermochrome piglet nest from MIK International.

But, until now, floor heating was measured using an infrared thermometer or thermographic camera, which can result in failures or faults being picked up late and therefore have an impact on mortality rates.

The new mat features a visible layer of the floor heating system, which is coated with thermochromatic pigments that change colour when the floor reaches a certain temperature.

This allows for quick and fail-safe monitoring of piglet housing, saving time and lives.

Drying-off made safer by GEA 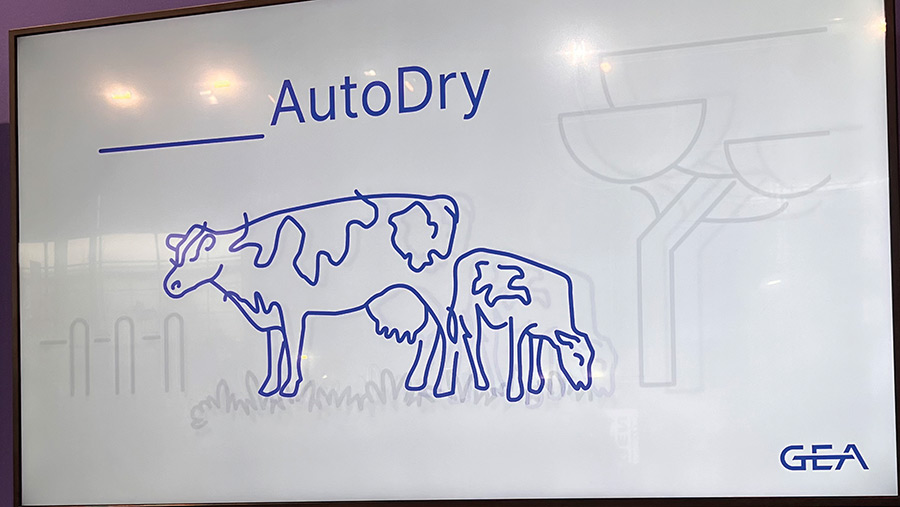 GEA has launched AutoDry, a system within its herd management software that allows the herdsperson to plan and prepare a cow’s drying-off period automatically.

This introduces automatic milking cluster removal at a pre-defined target milk volume, which starts about 10 days prior to drying-off.

This system is based on a natural model so reduces antibiotics use and, in turn, improves animal welfare.

And because it can be pre-set, it is claimed to be far more reliable than doing it manually.