Machinery guidance systems may be getting more sophisticated, but that is benefiting those at the lower-priced end of the scale too.

There are now several manufacturers offering retrofit kits that can keep ageing tractors on the straight and narrow.

Dutch-Ukrainian precision farming firm eFarmer was the first company outside of the big names to go mainstream with its fit-it-yourself Fieldbee.

Now Swedish outfit Sveaverken has got in on the act with the F100 Auto Steer.

The company is better known for its automated RoboPusher feed pusher and MooCollar cow monitoring tags but branched into tractor guidance following a tie-up with Chinese firm FJD.

The rebrand will see FJD’s previous autosteer offering, a chunky, 90s-looking terminal paired with twin domes and aerials, sidelined in favour of the sleeker F100.

The F100 has already proved popular in France and Turkey, as well as on farms in continental Africa and Asia.

This is predominantly down to its price – it costs just over £4,000 and offers the prospect of ramrod-straight crop rows when paired with an RTK correction signal.

It doesn’t have all the features of the fanciest systems, such as the ability to freely transfer information to and from the farm office, form work plans and the like.

However, it is able to help operators cultivate, spray, spread or drill far more accurately than a comparatively crude lightbar, and with minimum fuss.

Two of the first UK farmers to try out the kit were Cotswolds-based father-and-son team Martin and Tim Williams.

They have subsequently taken on distribution responsibilities through their newly established Agri Tech South West business. 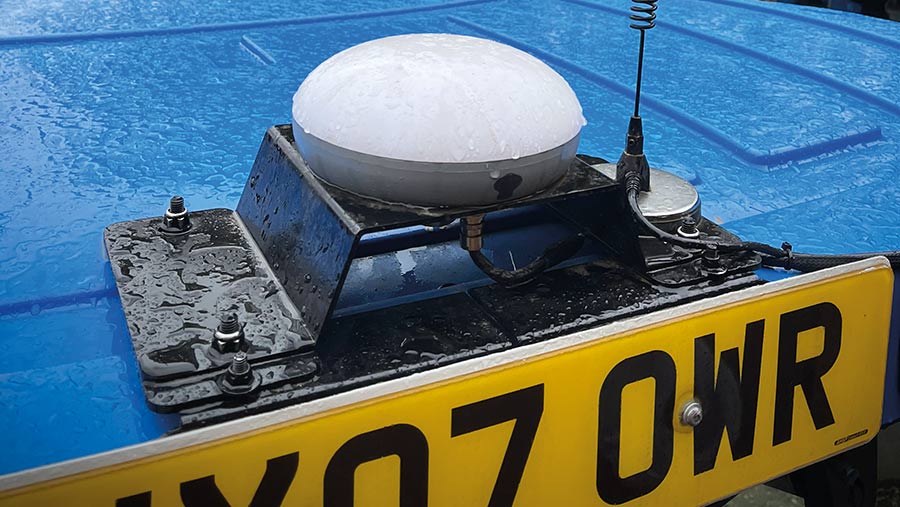 Autosteer is included in the £4,320 base price and comes by way of an electric motor and steering wheel assembly, which slots onto the tractor’s standard wheel spindle.

Directional changes are determined by information provided by a wheel angle sensor mounted near the offside axle kingpin, and data from the single GNSS receiver dome and 4G antenna on the roof.

The company provides a trapeze-shaped bracket for mounting these but, to avoid drilling holes in the tractor’s lid, Tim Williams recommends rigging up a secondary support that can be bolted behind the number plate.

The package also includes an in-cab mount for the 10.1in touchscreen control terminal. The latter can be wired to a battery power supply or the ignition switch, depending on the buyer’s preference. 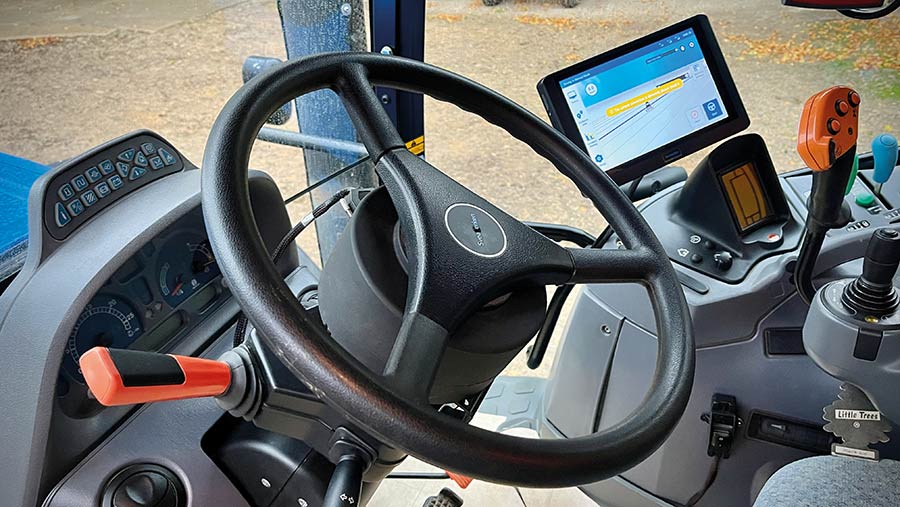 How accurate is it?

Anyone not too fussed about millimetre precision can keep costs down by running the free-to-use Egnos correction signal.

This provides a sub-30cm pass-to-pass accuracy, which is generally fine for cultivating and spreading fertiliser on grass.

However, subscribing to an RTK signal brings that down to below 2.5cm. This can be done via a mobile NTRIP network, such as RTKFnet’s service that costs about £650/year.

There’s also the option of investing in an on-farm base station, with Sveaverken’s version costing £1,200 and offering a range of about 2km. 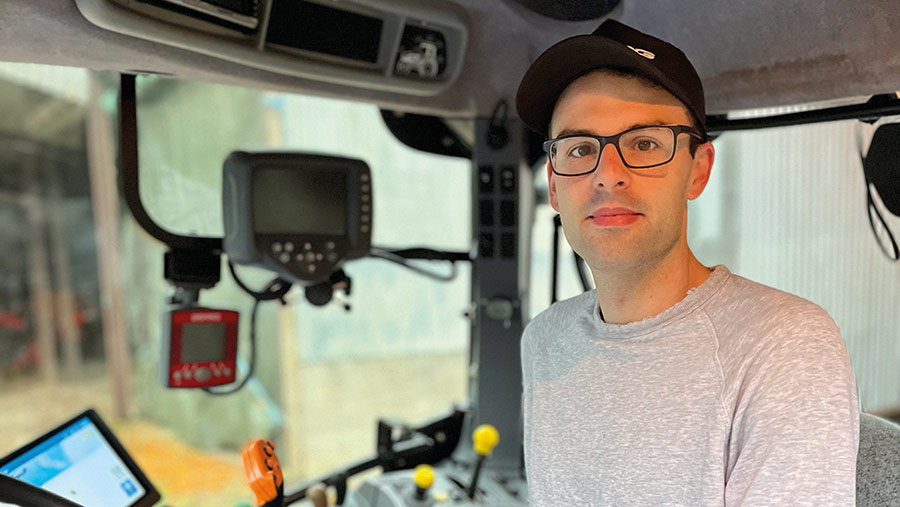 What can it do?

These extend to “field management” for storing boundaries, guidance lines and tasks; a library feature to memorise the settings for up to 10 implements; and U-Turn hands-free headland turning.

It’s also possible to synchronise guidance lines with other machines running a Sveaverken system in the same field, and the screen can display footage from a pair of wireless cameras – for which the company charges £200 apiece.

More functions are in the pipeline, with Isobus compatibility (which will be a paid-for unlock) expected to be available in the next few months.

Tim has also been working with the designers and programmers to develop other features offered by mainstream brands in the UK.

This includes getting its online Farmbook platform talking to different software, such as Farmplan, so that field details can be shared, guidance lines imported, tasks assigned and completed work logged.

Sveaverken breaks into the UK

Keen to improve the efficiency of his fieldwork and reduce operator fatigue, Cotswolds arable farmer Tim Williams went on the hunt for a retrofit kit that he could easily attach to his fleet of New Hollands and Fords, none of which were autosteer ready.

“We didn’t want to upgrade the tractors; the T7050 is a good all-round machine, it’s lighter than the new T7s, doesn’t need AdBlue, and can handle all of the work,” says Tim.

“But we wanted RTK-grade accuracy for drilling without spending a fortune, and without too much complexity.”

Tim first approached Trimble, but the prospect of paying a £1,600 fitting fee and having to shell out more to unlock various functions up-front put him off.

Then, out of the blue, he was approached on social media by Sveaverken, which was keen to break into the UK market and wanted someone to try – and potentially sell – the system.

He decided to take a punt on it and has been pleasantly surprised with the results.

“Fitting the kit took a couple of hours, which included burying all the wires behind the cab trim, swapping the steering wheel and mounting the receiver on the roof.

“I documented the process on my YouTube channel, Tim’s Cotteswold Farm, so anyone can watch the videos and follow the instructions.

“We decided to run a permanent power supply to the screen, rather than wiring it into the ignition, so it won’t cut out if the tractor stalls and we can leave it turned on in the yard should we need to run any upgrades.”

Though the F100 kit lacks some of the features offered by the mainstream brands, it hasn’t yet been a problem.

“The main thing for us is having straight lines and consistent pass-to-pass accuracy.

“It’ll usually connect to 34 satellites and 4G, so it’s a reliable service and works consistently at 0.1kph or 16kph, plus the software upgrades are free to download.

“In time, I’d like to have both frontline tractors wired up so that I can switch the screen, receiver and steering wheel between the two.”

The current catch is that there are no UK dealers, though there is a dedicated support service that can help with setup and operation.

Plus, Tim will act as a distributor for the firm and will help farmers fit the kits for a small fee.