This dairy farm has been feeding automatically for 15 years


“Wow, time flies!”, Henry Petter says. The first Triomatic feeding robot has been feeding since 2006 at his dairy farm. “It has brought us more than we could have ever imagined. In particular, the flexibility in scheduling is a big plus.

It’s possible to feed multiple groups several times a day. It is even possible to compose a small ration for three dry cows.”

Automation is becoming increasingly important on modern dairy farms to allow for efficient and profitable milk production. In particular, the ability to feed several times per day has a positive impact on the feed conversion ratio.

Research shows that a higher feed conversion ratio is the basis for improved overall condition and health of the cattle, resulting in a higher milk yield, better fertility and animal health.

The heifers are doing well above average

The first Triomatic feeding system started feeding the 250 dairy cows in September 2006 at this dairy farm. That means the feeding robot has provided more than 150,000 feed turns in the past 15 years.

Henry Petter is the farmer who pioneered the development of the first Triomatic automatic feeding system. Henry: “We can now work a few days in advance without having to worry about it.

You can cut out blocks and load them into the feed kitchen whenever you want. And the pecking order in the herd is gone because there is always fresh feed, and the fixed feeding times and high feeding frequency are important.

That brings peace to the stable. The heifers are doing well above average in the herd.”

An advantage of the Triomatic automated feeding system is that it allows the farmer to control feeding very precisely and thus achieve the best yield. Henry: “The high feed efficiency is due to many different factors.

What matters is the total (cost) picture. We try to get as much yield as possible from our own roughage. Our aim is not to get more, but instead to be better and more efficient.”

Previously, feeding was done for two hours a day, meaning about fourteen hours a week. “With the feeding robot, feeding only costs us an average of 4 hours of effort per week.

About 80 tons of roughage per week go through the system, and about 80 kg of residual feed remains. That’s about 1 part per thousand! We can also feed several groups, several times a day, so there is always fresh food.

It is even possible to compose a small ration for three (near-term) dry cows.”

“The investment for the automatic feeding system was approximately ₤200,000. When we add up the savings in terms of labour, energy costs (diesel fuel and electricity) and residual feed, and then add the maintenance costs to this, we arrive at a return on investment (ROI) period of 8 to 9 years.

We are now at the three-quarter point, and the system will easily last another five years.” 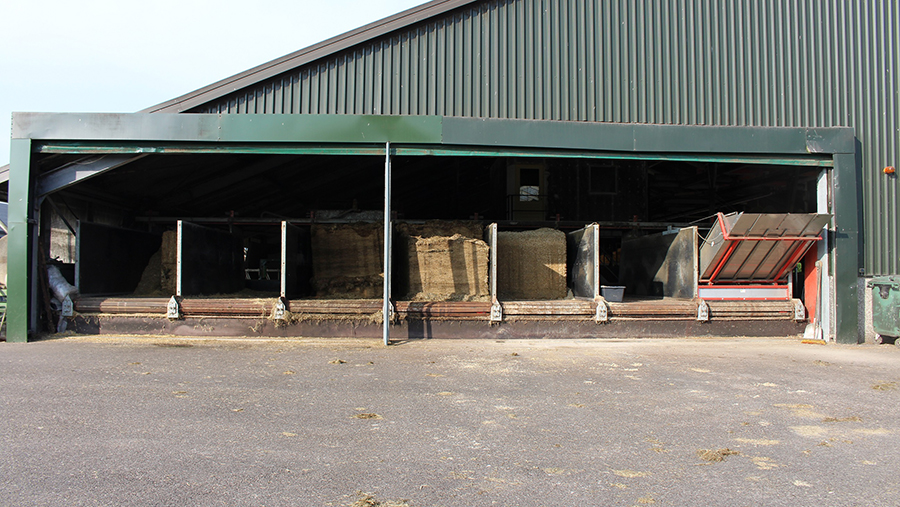 The three feeding robots can be combined with all Triomatic feed kitchens. This way you can compose your own automatic feeding system according to your wishes.

Contact Trioliet and ask about the 15th Anniversary promotions: www.trioliet.co.uk