A fully autonomous robotic weeder capable of inter-row hoeing grassweeds has been developed by the University of Lincoln agricultural research team.

Kitted out with a real-time vision camera, four individual speed control wheels and a battery life of up to 12 hours, the electronic machine runs at a typical tractor speed.

Charles Fox, senior lecturer at the university and principal investigator of the project, says blackgrass is a menacing weed and the new robot could offer a possible solution to its control.

How the robot works

Both wheat and blackgrass are similar in shape and size, which makes it is difficult to differentiate them during early growth stages. Conventional cameras therefore cannot be used.

“What we do know is wheat is planted in rows, while the blackgrass appears in random patches. Relying on the precise location of the wheat row and how it appears in relation to weeds rather than the physical properties of the weed itself forms the basis of the robotic development,” explains Dr Fox.

The robot simply hoes between the wheat rows, assuming any small patch of green between the rows are weeds. This works successfully during early growth stages, but as the canopy closes and the leaves begin to cross over, identifying rows through computer vision becomes difficult. 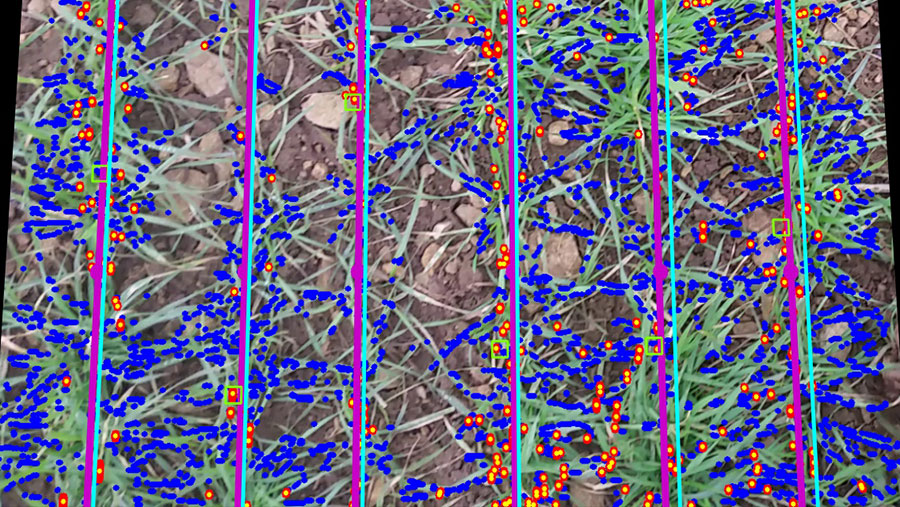 “The robot camera can distinguish particular leaf angles. The structure of leaf orientations in the canopy tends to be vertical along rows and horizontal between rows due to the location of stems,” says Dr Fox.

This means the machine can locate a row to 50mm accuracy – sufficient for the agri-robot’s wheels to drive between, assuming a drill row spacing of 180mm and a wheel width of 80mm. Wheel width can be adapted to as narrow as 20mm – the width of a small bicycle tyre.

Dependent on the width of the row spacing, anywhere between five-to-10 rows can be hoed in a given time.

The only drawback of inter-row hoeing is that any blackgrass growing within the wheat rows is not controlled.

The robot remains in the research stage and is not commercially available. Dr Fox notes that the gap between academic research projects and commercial reality needs addressing.

“Commercialisation requires investment and development to translate into robust safety certified systems, with similar systems taking five-to-10 years to do this. This is difficult in the UK due to the well-known ‘valley of death’ between universities and industry.”

The market forces are there, but scaling-up the project commercially is limited. We are always open for collaboration ideas and are looking for people to work with to help bring projects into practice, he concludes.

Working together with drone technology

The autonomous weeding machine can also be used in conjunction with drone technology to rapidly identify and target problem weed areas.

Hyperspectral imaging which analyses a plant’s ability to reflect certain waves of light can be fitted to a drone and a pre-flight can map particular areas of blackgrass.

This geospatial information can then be shared across platforms to the robot, enabling it to target specific field areas rather than driving up and down every crop row.

250kg
Weight of the machine (dependent on number of battery packs – the greater the battery life, the heavier the machine)

What Jobs to do in the Garden in December