Mojow may have found the holy grail of fieldwork autonomy by devising a means of controlling tractors of any sensible vintage with state-of-the-art driverless technology.

And, unlike typical tractor guidance systems that are designed to crudely follow pre-loaded AB lines within established field maps, Mojow’s kit can plan and execute an entire fieldwork operation without human intervention.

This marriage of established kit and new tech promises plenty of advantages. There is no need to replace perfectly serviceable tractors just to get the latest software, the system doesn’t tire like an employee overdosed on Red Bull after 18 tedious hours in the seat, nor does it rely on outdated field maps.

And for those with huge acreages to cover, one person can ramp up their productivity by monitoring several machines simultaneously – saving precious hours otherwise spent babysitting a tractor as it trundles up and down a pre-determined straight line.

This will be particularly appealing to vast arable farms and contracting businesses, especially those in North America and Australia, where diminishing rural populations mean labour is neither cheap nor easy to come by.

The business was set up in February 2020 by Moji Hedayatpour and Owen Kinch, both of whom cut their teeth at Canadian firm Seedmaster. There, they helped develop the novel Dot tractor, a cabless tool carrier that has subsequently been taken on by Raven and New Holland.

They set about applying the same driverless concept to a regular tractor, saving them the challenge of sourcing, assembling and testing the engine, transmission and hydraulic system of a dedicated platform.

From a farmer’s point of view, such an approach appears lower risk and less daunting than swapping a conventional workhorse for an entirely new robot, particularly as most of the options currently in production are small, low-powered and relatively unproven.

“Robots definitely have a place in agriculture, but there are millions of tractors in the world with plenty of potential, and we can help farmers get more from them,” says Mr Hedayatpour.

“There is no way that we, or any start-up, can compete with John Deere or Agco when it comes to building them – they’ve been developed over decades, can withstand plenty of abuse, and there is an established dealer network to sell and service them.

“They can also provide whatever horsepower a farm needs and work with the implements the farm already owns. But we can make them more intelligent.”

This strategy means operators always have the option of hopping on the seat and taking charge, maintaining a versatility that avoids complete devotion to computer software.

So far, the system has been fitted to a Case Magnum 380, which was tasked first with flat rolling and later heavy harrowing.

It has now clocked up thousands of driverless hectares at Lakeland College, a 600ha student-managed arable and dairy farm in Alberta, and Allam Farms – a sprawling 6,900ha operation east of Edmonton. 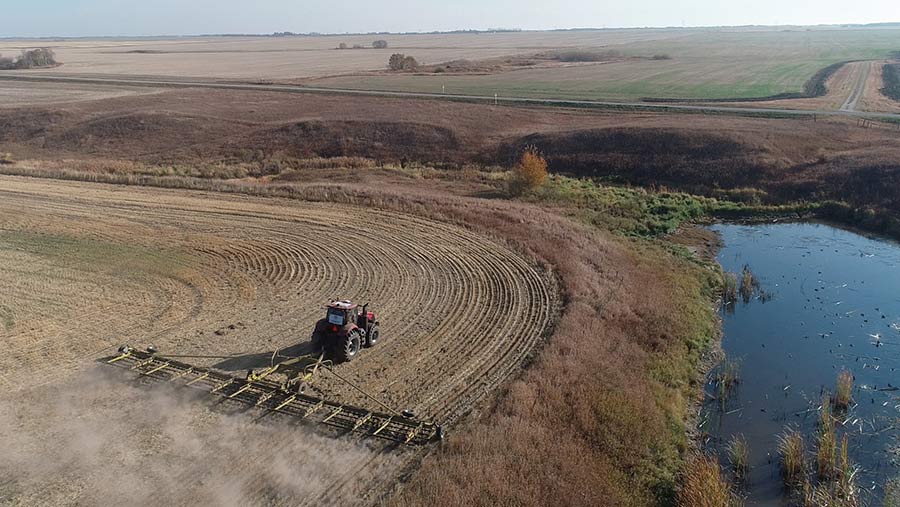 Mojow employs a team of 12 software developers tasked primarily with analysing and annotating millions of images, distinguishing boundaries from fields and water from soil.

These datasets allow them to build “machine learning” models – the process of teaching the computer how to react to information supplied by GPS, cameras and sensors.

In effect, it works just like a weed-targeting spot-spraying system by assessing digital representations of the surroundings, but it is processing the pixels to look for trees and telegraph poles rather than poppies and pansies.

The company started by developing a means of efficiently working a field (when cultivating, for instance). This generates AB lines based on a pre-determined headland boundary, much like a conventional autosteer system but without a human having to set it up.

The on-board computer then uses this information to control the tractor’s engine speed, transmission and steering.

Disaster protection comes in the form of cameras and sensors that can spot and identify any undocumented obstacles that appear in the tractor’s path. These include objects that protrude from the ground, such as a tree or trough, as well as large areas of water and deep ruts, which are logged and mapped for future reference. 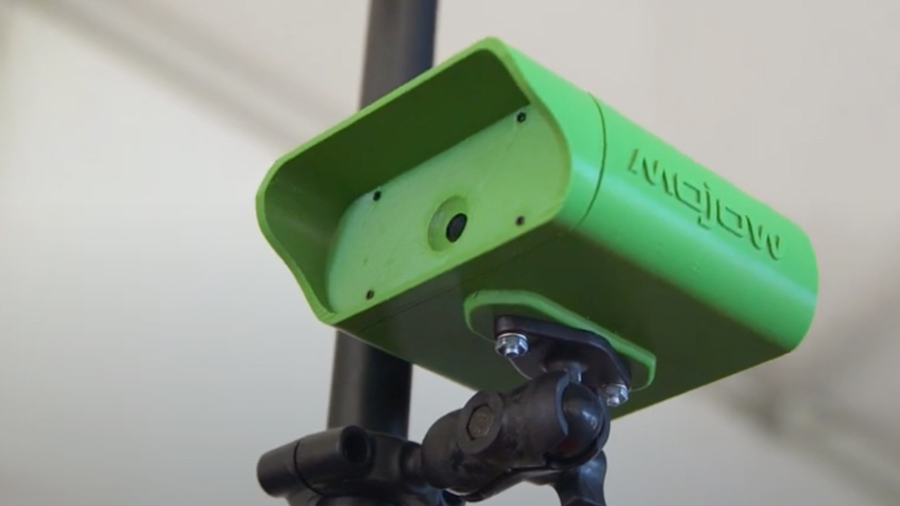 “If a human can see and avoid it then Mojow can programme the software to do the same,” says Mr Hedayatpour.

“However, we can’t remove farmers from the equation – they’re the ones with the knowledge to make subjective decisions regarding the weather and the suitability of ground conditions for work.”

The company has now taken guidance one step further by devising a boundary detection system.

Rather than managers uploading existing field maps on which to base path planning, the Mojow-equipped Magnum can form them itself as it works.

It knows what is field and what’s not, based on images of stubble, crops and clear soil versus grass boundaries, water, ditches and trees, so the operator can simply drive the tractor to the field entrance and leave it to get on with the job.

Beyond path planning and obstacle detection, the other major element in automating fieldwork is the ability to control an implement.

For the fanciest drills with a jungle of hydraulic and electrical connections this is incredibly complex and still some way from reality, but Mojow has already come up with a system for simpler cultivators.

This process started with the horizontal unfolding of a three-gang flat roll, which requires the tractor to simultaneously reverse and steer to open the wings, before operating the hydraulic locking latch.

To do so, cameras monitor the angles of the outer gang arms and the drawbar, with the tractor’s speed and steering automatically adjusted.

Prior to its application on the tractor, which worked first time, this process was simulated on the software in the office thousands of times.

Though it took six months to complete, the principles can also be applied to other equipment relatively easily – something the developers have already done for a tine harrow. 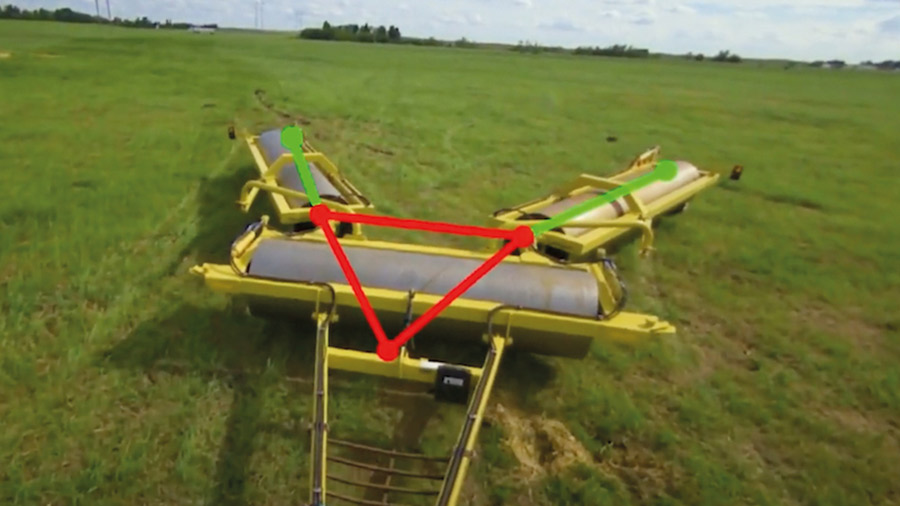 Mojow is purely a software developer, so it employs existing third-party equipment to get the system working.

This includes a standard RTK receiver to provide location information that, for the demo machine, was sourced from Australian outfit Advanced Navigation.

Obstacle detection is provided by two different components, the first of which is a pair of lidar sensors – one at the front of the cab and a second facing rearwards.

Low-resolution versions of these have a range of roughly 50m and typically cost about £2,000, but that can rise to nearer £20,000 for top-spec models, making them the priciest single elements in the Eyebox system.

“Lidar sensors are expensive relative to the amount of information they supply, particularly compared with a US$500-$2,000 [£300-£1,200] camera that provides far more detail,” says Mr Hedayatpour.

Between five and eight stereo cameras are fitted to the tractor – at least three at the front and two at the back – to provide a constant feed of images for assessment. In theory, these should also be able to detect any blockages on a cultivator or drill.

“In time, camera range sensing may make lidar redundant, but it is good for safety to have two layers of information, as long as the price can be justified.”

As well as using the data provided by the cameras, sensors and GPS, the kit also plugs into the tractor’s canbus system. This allows Mojow’s powerful on-board computer to both monitor and alter parameters such as engine rpm, forward speed and wheel angle.

Managers can start the tractor, initiate work and view proceedings through a mobile app. There is a display fitted in the cab, but with no driver it is largely redundant. 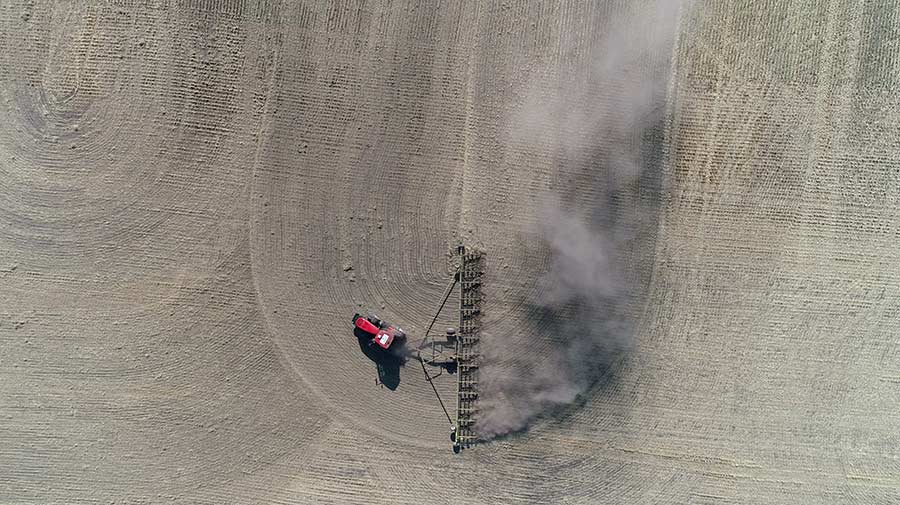 When will it be available?

Though the system is still deep in the development phase, Mojow hopes to have it production-ready in the next couple of years – provided the trials are successful.

Initially, it intends to target the North American and Australian markets, where fields are larger, logistics are simpler, and labour shortages are chronic.

However, it can be relatively easily adapted for European conditions, given it can be configured for any tractor model, implement and field size.

Like most start-up tech firms, Mojow is also actively looking for partners, both for financial support and assistance in development.

Several of its peers have been snapped up by bigger fish, including Bear Flag – a Californian robotics company that was acquired by John Deere in a £179m deal 18 months ago. Similarly, guidance specialist Trimble invested in Sabanto, which operates a contracting service using a fleet of driverless Kubotas.

Running a driverless vehicle on the road is eminently doable, but fraught with challenges – as Elon Musk will attest.

Mojow’s long-term ambition is to develop a “yard-to-yard” system, whereby the tractor can run entirely autonomously once it has been given a series of tasks – including commuting to the block of land in question.

However, regulations – and lack of clarity about them – make it exceptionally tricky to bring to fruition.

“It’s possible, and we hope to demonstrate that it is safe at one of our partner farms,” says Moji Hedayatpour. “There are obviously more variables – cars, bikes and so on – that make for a less predictable environment, but the principle is no different.”

What Jobs to do in the Garden in September

What Jobs to do in the Garden in September